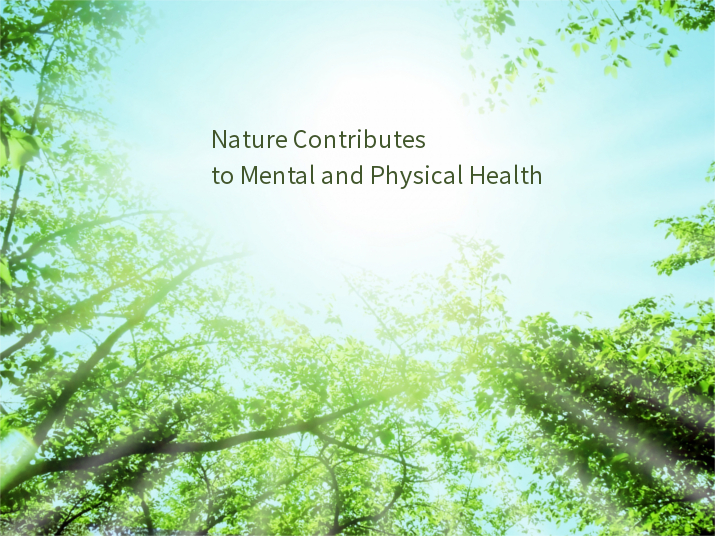 “Forest Therapy®” is a research-based practice supporting the healing of individuals through the immersion in forests.The name taken from the Japanese art of “Shin-rin-yoku”which translates to “Forest Bathing”.

From the moment you set foot in a lush forest covered with dense vegetation and fragrant fresh soil, you can feel life surrounding you using all your senses. We experience the therapeutic and relaxing power of the forest. The act of immersing yourself in a forest to enjoy this effect is called “Forest Bathing”. While it has always been intuitively known, there is little discussion about the physiological mechanisms behind these healing effects.

Diseases due to lifestyle choices as well as mental disorder have recently become a major problem in society. With the growing interest in physical and mental health, people have started to actively seek fact-based scientific information on the health benefits and stress relieving aspects of “Forest Bathing” rather than relying on simple empirical-based evidence.

Consequently, scientific studies on the physiological impact of “Forest Bathing” have been undertaken and a protocol for “Forest Therapy” was developed as well as looking into the possibility of further clinical applications.

“Forest Therapy”is a research-based healing practice through immersion in forests with the aim of promoting mental and physical health and improving disease prevention while at the same time being able to enjoy and appreciate the forest. To give you some ideas for activities one can enjoy while practicing “Forest Bathing”, there are relaxation techniques such as mindful meditation or yogic breathing in the forest, as well as aromatherapy. Also, physical fitness programs involving forest walking and Nordic walking. There are also quaint towns and villages nestled in these forests where that we can enjoy hot springs and healthy local meals prepared using fresh local ingredients. Some places also provide health consultation in cooperation with a physician.

“Forest Therapy” is neither hiking nor mountain climbing.
Why don't you come and experience for yourself the beneficial effects of forests?

“Forest Therapy”encompasses all the general recreational activities which take place in the forest. Through activities such as relaxation and improvement of the immune function ,we except preventive medical effect. It is proposed that we plan and conduct “Forest Therapy”carefully based on the evidence. In the future, “Forest Therapy”may assist various therapies in the medical field. However, “Forest Therapy” should be practiced under the instruction of a physician until the evidence becomes admissible.

The Results Obtained in the Experiments

Physiology, psychology and physical experiments executed in urban and forest environments indicate that the average concentration of “Stress Hormones“ called salivary cortisol, in participants exposed to forest environments was lower than that of participants of the urban environment control group. In addition, measurements of the heart rate “Yuragi“ showed lower sympathetic nervous activity which is a consequence of reduced stress, and an increase in parasympathetic nervous activity which is a result of slowed activity of the prefrontal cortex. The experiments also indicated that a three-day/two-night forest bathing trip boosted the immune system demonstrated by an increase in the body's Natural Killer (NK) cell’s count.

Environment in the Forest

Fragrance Ingredient of the Forest (Phytoncide)

The Profile of Mood States(POMS) in the Forest and Urban Environments
Using the POMS questionnaire to measure a person’s mood (tension and anxiety, vigor) etc. The urban and forest environment comparison experiment indicated that the level of “tension”and “fatigue” decreased and “vigour” increased in participants after session of “Forest Bathing”.

An Increase in the Concentration of Salivary Cortisol is noticeable when taken in a Forest Versus Urban Environment
The cortisol is representative as a stress hormone, and concentrations increase in stressful situations. Concentrations levels are measured from a person’s saliva. The figure on the right shows the level of cortisol stress hormone concentration. The salivary cortisol level from participants taken in a forest environment was noticeably lower when compared to the level of participants taken in an urban environment.

※Above figures are experiment results conducted at “Forest Therapy Base” at IIyama, Nagano. For more information, please visit the The society of Forest Medicine within the Japanese society for Hygiene .